Posted on February 9, 2011 by Patricia Dempsey

It’s with a heavy heart I write about the sad and unexpected passing of my friend, journalist, Steve Read. I’d last spoken to him in the middle of the night (aka 3am last Saturday morning) about various shippy-related things including how he was looking forward to the Fred Olsen cruises, having to eat humble pie if Grand Princess keeps her handle after the refit and many other topics. He had so many plans which will sadly come to nothing. Hearing the news this morning left me feeling numb. I hadn’t known him as long as his many journalist friends such as Captain Greybeard but for the few brief years I did, he always managed to put a smile on my face. I first met him properly after a couple of years of emails on the 26th February 2010, the day MSC Magnifica arrived from France for two days. I’d been freezing in the bitter wind with my dad and friend John at Town Quay then we made our way to Mayflower Park where I spotted someone rather familiar in the shelter talking to a video camera. The following night he called about 1.30am from onboard and was very drunk but also happy as he rambled about mini bars and how some presentation was dropped on the floor. It took me a while to stop laughing afterwards and get to sleep. He picked me up in his pride and joy (BMW with gorgeous heated seats!) in the morning as we waited for the ship to sail, supposedly at 9am. He was spot on when he said it wouldn’t be! The weather was just as bitter as he did his stuff for the viewers. Sadly that report has gone the way of Sky Travel but here’s a photo of him doing what he did best. 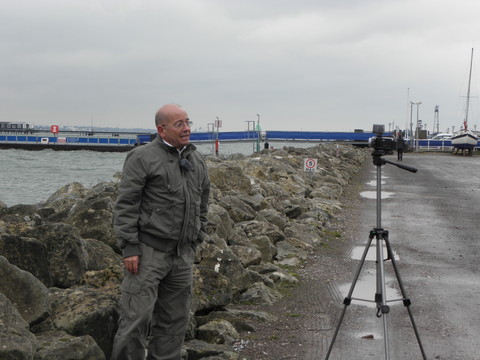 My mum died on the 25th November and Steve emailed me a lovely message of condolence. Six days later was the first meeting of the Cunard Vistas. Steve had originally planned to go – until the morning was bitterly cold! I sent a text saying I’d get pics while he stayed in the warm and the next thing the phone rang with him asking if I wanted a lift! I’d shamed him (his words) but he was glad I had because he enjoyed it a lot. That was my first foray as camera lady after Heathrow broke his tripod but enjoyed it. He had a new camera which was heavy but I got the hang of it and he liked what I’d done on take two. I was thrilled when he asked me to do the same on the 5th January when we had six ships. Quite a challenge for him but he managed it very well. I don’t know if any other journalist had done the same. All I know is the Saga Captain, Steve Angove, had a few interviews while all local news coverage showed were dockside or from a boat. But he was in his element and I was impressed how he managed to fit it all in plus remember everything he needed to. Here’s another chance to enjoy it.

Steve helped me so much after my mum’s passing by making me laugh so to say it’s a shock that here I am writing about Steve’s own is one hell of an understatement. I just hope it was quick and he didn’t suffer.

UPDATE: Here is my blog about about Steve’s funeral.