Travelling With A Stoma

Posted on September 2, 2018 by Patricia Dempsey

Having a stoma, whether planned or not, can be a terrifying and daunting experience. You have to rethink your entire life, including diet, and can feel embarrassed by the bag.

Bums are one of the great taboos which we need to talk more about. People end up with a colostomy or ileostomy for a variety of reasons (cancer, ulcerative colitis, perforation to name three), which can be temporary or permanent and are nothing to be ashamed of.

“What would you know about it?” I hear you say. I know a hell of a lot, having had both colostomy and ileostomy since my bowel was perforated during a ‘routine’ 90 minute hysterectomy in August 2016 which took 4 hours due to a 29 year history (22 years diagnosed) of endometriosis.

And that’s why I’m writing this. I hope to be able to help based on my own experiences, since it took me a year before I would talk about my stoma publicly, while only very close friends and a couple of people at work knew.

Originally, at the beginning of September 2016, I ended up with a colostomy because my sigmoid colon had become infected and ruptured at home six days after my hysterectomy. This was my worst nightmare.

My paternal grandfather had bowel cancer and died aged 50 in 1969. My mother was diagnosed with bowel cancer in 2010 aged 64. He had bags. Hers didn’t spread and she died of strokes. Knowing I could get it at some point too, a bag terrified me. But here I was facing a fait accompli.

The bag, I was told, would be on for 6 months then reversed. It was something to look forward to!

If you’re squeamish or gag at certain smalls like me, this was an awful thing to deal with. Your diet goes out the window as certain things can cause blockages or the runs. After a while, you learn what you can and can’t have.

My stoma nurse, Nicola Patel, was absolutely amazing. She’s the one who decided whether I could cope sufficiently to go home and remained my nurse throughout. But when I saw her, it was only the second time I’d changed my bag myself in 13 days.

The first had been a baptism of fire that morning when the old one was falling off! There had been no nurse available over the weekend to help me as the ward had been incredibly busy. Nicky was happy and I went home.

My first bags were by Coloplast, which you changed when full. I didn’t have the confidence to empty any at that point. Also back then, the stoma team used Charter for prescription orders if you wanted free extras like disposible bags and hygienic wipes (not to be used on the stoma). If you preferred, you could get everything but those from your chemist. 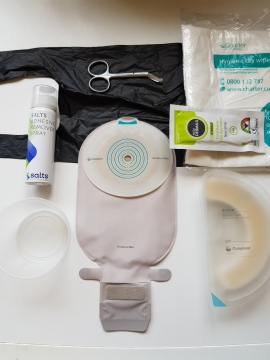 Most items were provided by the stoma team while later, Charter sent a convenient travel pouch. 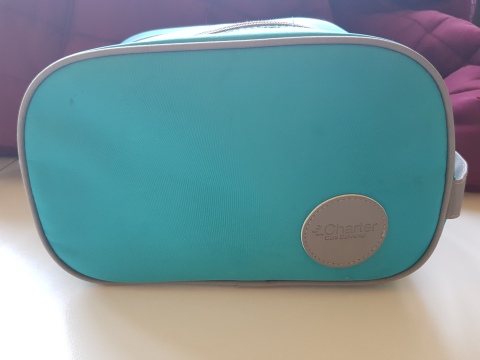 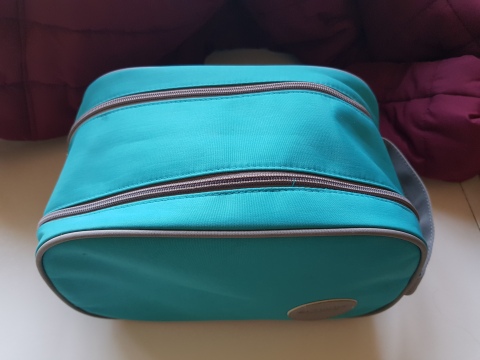 Anyone who has had a stoma knows you need to alter your diet to control output and the main fear is the bag coming off.

Pancaking is the worst thing. That happened to me a few times while out, including at my GP surgery, and is extemely embarrassing. Imagine that on your holiday, either waking up or while out. Absolute nightmare! I took to putting a towel on the bed but you still need to pack far more than you would normally in case of accidents.

The best thing I ever got was Brava Elastic Tape, which are extenders you place around the bag seal. If you also develop a parastomal hernia like me, these are priceless and help keep everything in place. There is still a risk of pancaking but less chance of the bag coming off at the top, especially in bed.

If flying, however, I’d have to pre-book an aisle seat close to the toilet in case of a quick dash. When flying to Barcelona on a Cunard charter flight, they put me in seat 1F after I had explained my problem, which I was very grateful for. Though, due to the constant delay with the reversal and repairing my parastomal hernia, I needed a seatbelt extension for the first time.

There is also the question of security at airports. In these heightened times of body scanners, do you tell them in case they think you’re trying to smuggle something under your clothes? Mistakes have been known to happen. I once had an envelope thought to be a Kindle so was pulled to one side. I tended to let them know. At Hamburg airport, I was taken to the side, asked where the bag was and patted down.

It was very different getting the temporary ileostomy after colostomy reversal in December 2017. You can have many more problems with foods than with a colostomy as it doesn’t digest as much so taking Dioralyte to replace lost minerals is a must. You really have no choice but to have bags you empty. Mine supplied by the hospital this time around were by Dansac and bloody awful. Despite a vent, it still filled with air.

The bags fill faster generally too, depending on what you eat. I had awful problems with tomatoes. Within an hour the bag was full of liquid. Imagine being sat on the bus and feeling it fill, wondering if it’s food, liquid or air, terrified it will come off. That happened to me in January as I was on the way to Queen Victoria for a cruise and had to change my clothes in Red Funnel because the air pushed it off around the top.

My problems didn’t end there. My case didn’t turn up and I desperately needed to change the bag a second time, as well as change my clothes. It turned out my luggage had been taken to cabin 2004 instead of 2014 so a quick change before muster was required. Thank goodness Cunard ships have launderettes!

The ileostomy bag also gave me awful skin problems I hadn’t had with colostomy ones. It was red raw and bleeding. Nicky suggested a convex to try and heal the skin with seals. Again it was the awful Dansac bags with rubbish vents.

I first tried it when I went to my friend’s for the weekend in Banbury and reluctantly came to appreciate these. The belt kept it securely on, making travel and more physical activity less of a worry. The Brava Elastic Tapes give you that extra bit of security. However, that trapped air is very frustrating. You’d have to keep having to open the bag to release it otherwise it would push the end open, which was a nightmare when I asleep.

Coloplast also have them, and I was given some to try as an alternative. They also can be used with seals and a belt. 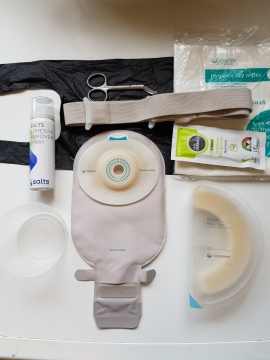 Due to some security with the Dansac bags, plus the fact you actually needed to change it less often regardless of advice, I decided to stick with them. The longest I wore one was two weeks and only changed it when it was lifting off. My skin was so much healthier that way.

I had my ileostomy reversal in July 2018, ending 22 months of bags and everything that goes with it. You need to rethink your diet yet again, but I was never told what to expect or had a goodbye from my stoma team. I’ve been very lucky and, after constipation for the first 8 days, everything settled down really quickly, which my GP didn’t believe. I just have to be careful (so far) of decaffeinated coffee.

Don’t be ashamed of having a bag. It cannot be helped. Do what suits you best, ignore any ignorant people because they may end up with one themselves in the future and enjoy your holiday!

This entry was posted in General. Bookmark the permalink.